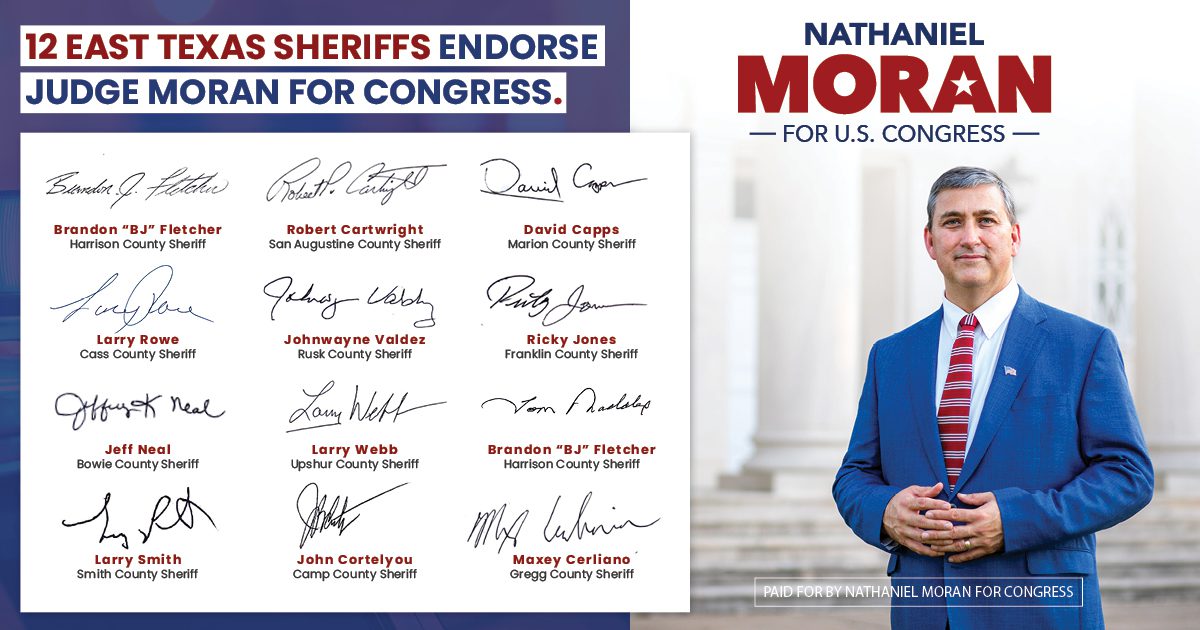 TYLER, TX — A dozen sheriffs from Bowie County to San Augustine County have publicly endorsed Smith County Judge Nathaniel Moran in his bid for Congress. The law enforcement leaders note Moran’s proven, strong support of law enforcement as a critical factor in their decision.
“I’ve had the honor of working with Judge Moran for the last five years. The work he has done has not only helped make Smith County safer, but made the entire nation safer because Judge Moran has taken the fight directly to the cartels coming across our border through projects like the Texas Anti Gang Center and Financial Crimes Intelligence Center, which he helped establish as regional initiatives in East Texas,” said Smith County Sheriff Larry Smith.

Moran has served as County Judge of Smith County since 2016. In that role, he led efforts to increase law enforcement pay by 14% to ensure the County could recruit and retain the very best first responders.

“As a 43-year veteran in law enforcement, I know the importance of having strong leaders who support law enforcement at every level of government,” Gregg County Sheriff Maxey Cerliano said. “After working with him on several regional initiatives, I know that Judge Moran is a proven leader who has the courage to make the right decisions even in difficult circumstances.”

In addition to Smith and Cerliano, the following Sheriffs across the district publicly support Judge Moran:

“I am grateful to have the support of so many Sheriffs across Congressional District 1,” Moran said. “They go to work every day and put their lives on the line for us, so it is truly an honor to have the opportunity to support law enforcement every chance I get. East Texans can rest assured that while others seek to de-fund the police, I have and will continue to work tirelessly to ensure they are respected and supported in the great work they do.”

Moran is running in the Republican Primary for Congressional District 1, comprised of 17 counties across East Texas. Early Voting is February 14 – February 25 and Election Day is March 1.